Mosè di Giosue Bianchi studied under Giuseppe Bertini at the Accademia di Belle Arti di Brera in Milan. He travelled in the course of his studies to Rome, Venice and Paris (where he exhibited successfully for the first time in 1878) before returning to settle in Milan. He particularly admired painters of the Venetian School, together with Meissonier and Fortuny. His prolific output included portraits, landscapes, historical scenes and genre subjects; he painted in intensely bold colours and with admirable verve and insouciance, although his work may appear at times somewhat uncoordinated. Examples of his body of work include Canal at Chioggia (acquired by the National Gallery in Rome), Captain Molta at the Gates of Chioggia (purchased by the King of Italy), and Storm at Sea (for the Villa Reale in Monza). Bianchi exhibited a series of etchings at the Exposition Universelle in Paris in 1900. Three of his engravings of Comrades in Arms also featured in the 1935 Exhibition of Italian Art ( Exposition d’Art Italien). From 1898 onwards, Bianchi served as principal of the Accademia di Belle Arti Cignaroli in Verona. 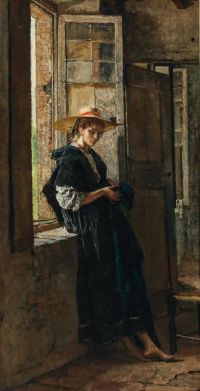 Bianchi Mose A Lady With Strawhat By The Window canvas print 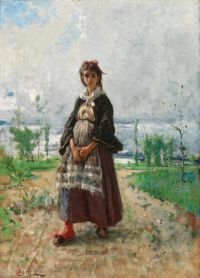 Bianchi Mose A Promenade On The Lakeside canvas print 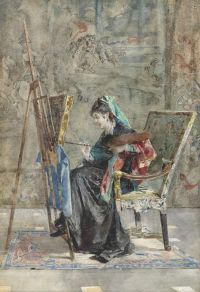 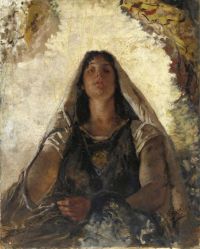 This print is absolutely exquisite. thank you so very much. (Louisa Silano, Nashville, TN, US)