Luigi Bechi was born in Florence. As a young Italian patriot, he joined in the war for independence. In the campaign of 1859 against Austria, he joined as a simple soldier in the artillery in the fifth army corps and in 1866, he fought with Garibaldi in the Trentino, and was wounded and made prisoner in the Battle of Bezzecca. He trained under Giuseppe Bezzuoli and Enrico Pollastrini in Florence. In 1870, these painters helped him obtain a position as professor of the Royal Academy of Fine Arts in Florence. While he cultivated historical paintings, he also painted landscapes, pastoral scenes, and genre. Among his works are Michelangelo before dying Pope Urban, commissioned by Cavalier Danti; Susanna Tempted and Hagar Banished by Abraham (1861, won prize at Italian Exposition in Florence); The Cavalry General De Sonnaz saved by the Milanese Voluntary Marchese Fadini, episode of the war against the Austrians. 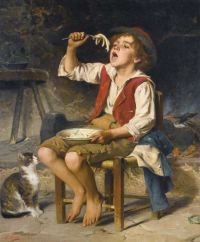 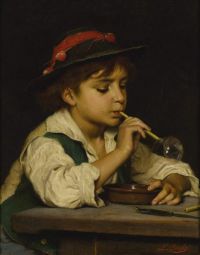 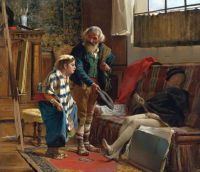 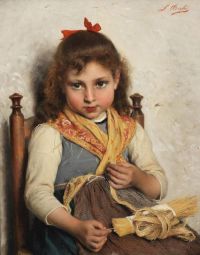