Amoedo began his career as an artist in 1873 as a student of Victor Meirelles. In 1878 he won the first prize at the Brazilian Academy, which allowed him to travel to Paris, where he lived from 1879 to 1887 studying at the École des Beaux Arts. He was a pupil of Alexandre Cabanel and also worked with Paul-Jacques-Aimé Baudry. He was a professor and later director of the Brazilian Academy, renamed School of Fine Arts ou Escola Nacional de Belas Artes at the fall of the Brazilian Empire. His students include Eliseu Visconti. He died forgotten and so poor his friends had to help the widow pay for his funeral. His paintings still hang at the National Museum Museu Nacional de Belas Artes in Rio de Janeiro. 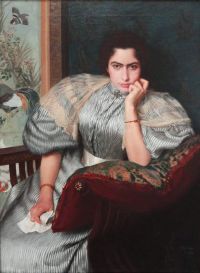